Escorted Tour 9 Days From $3999.00
Experience the grand cities of Europe 's Alpine region and be part of history in the making when you enjoy a performance of the legendary Passion Play in the Bavarian village of Oberammergau. You 'll view the picturesque pinnacles and turrets of Neuschwanstein Castle, and then overnight in Bavaria 's mysterious Black Forest, where popular souvenirs include authentic cuckoo clocks and wood carvings. In Switzerland, highlights include a visit to the Chateau de Chillon on lovely Lake Geneva and a walking tour in Lucerne. A farewell dinner with your fellow travelers is the perfect end to this memorable tour.

Day 2: Oberammergau, Germany - Tour Begins
Your tour opens in the quaint village of Oberammergau, renowned for woodcarvings and the Passion Play. This evening, meet your fellow travelers for a welcome dinner.
(Meals: Dinner)

Day 3: Oberammergau - Passion Play
This afternoon, witness a performance of the epic Passion Play. The original performance dates back to 1634. During the Thirty Year War, Oberammergau was spared the Black Plague and for this reason, the citizens vowed that every ten years they would give a play to honor the last days of the life of Christ. The performers of this once-in-a-decade event are all native to the village. To lend authenticity to the performance, the cast starts to grow their hair and beards more than a year in advance. Also, the intricate costumes are made locally by the villagers. During a break in the performance, join your fellow travelers for dinner before returning for the remainder of your Passion Play performance.
(Meals: Breakfast, Lunch, Dinner)

Day 4: Oberammergau - Black Forest
Visit the Church of Wies (UNESCO) and its miraculous figure of the Scourged Savior, said to have shed tears during prayer in the 18th century. Today, fairy tales become reality at a picture stop of Bavaria 's most famous castle, King Ludwig 's Neuschwanstein. Next, you are off to the heart of the stunning Black Forest, a region famous for its artisans who create authentic cuckoo clocks, Hummels and wood carvings.
(Meals: Breakfast, Dinner)

Day 5: Black Forest - Zermatt, Switzerland
Welcome to Switzerland! Your first stop en route to Zermatt is at one of the most photographed castles in the world, the Château de Chillon, located on serene Lake Geneva. Later, enjoy a short train ride aboard the Matterhorn Gottard Bahn from Tasch to the relaxing pedestrian village of Zermatt in the Swiss Alps. Take a stroll and breathe in the fresh Alpine air.
(Meals: Breakfast, Dinner)

Day 6: Zermatt
Today Zermatt is at your fingertips. It 's your choice! Explore on foot during a guided walking tour -OR- experience Zermatt independently before visiting the Matterhorn Museum to learn more about the triumph and tragedy of the first ascent of this imposing peak. The remainder of your day is at leisure.
(Meals: Breakfast)

Day 7: Zermatt - Grimsel Pass - Lucerne
Views of glaciers, crystal clear rivers and snowcapped mountains will invigorate you as you travel through the spectacular scenery of the Grimsel Pass. Your destination is Lucerne, the “Swiss Paradise on the Lake.”
(Meals: Breakfast)

Day 8: Lucerne
This morning, embark on a scenic walking tour of this picturesque city, including a stroll through its romantic Old Town. The remainder of the day is yours to explore independently all Lucerne has to offer. Tonight, come together with your fellow travelers for a farewell dinner featuring local specialties, and toast the end of a memorable trip.
(Meals: Breakfast, Dinner)

Wies Church
Visit the Church of Wies, a place of pilgrimage since the 18th century and classified as a UNESCO World Heritage site. Visit its miraculous figure of the Scourged Savior. Legend claims that the wooden statue shed tears during prayer.

Neuschwanstein Castle
This fairy-tale castle was built on the ruins of an earlier castle by King Ludwig II of Bavaria, beginning in 1864. The king had spent time in his youth in the town near the site of the castle, and when he took the throne he began building a fantasy castle on the ruins of two earlier fortresses. Many of his fantasies came from his love of the musical mythological works of Richard Wagner, who was his friend, and he spent most of his personal fortune and borrowed to build Neuschwanstein Castle. He only lived there 172 days before his death. The castle was an inspiration for the Disneyland Sleeping Beauty Castle.

Black Forest
This is a heavily forested mountain range in southwest Germany that lies east of the Rhine River and borders France on its west and Switzerland in the south. The highest peak in the 150 km-long (93 miles) region is about 1500 meters/4,900 feet, and there are several beautiful glacial lakes within the forest, such as Titisee and Feldsee. The famous spa town of Baden-Baden is in the northern part of the forest, and there are numerous hiking trails and driving circuits to visit the traditional villages. The Black Forest is known for wood-carving, especially in the manufacture of cuckoo clocks, and for foods like Black Forest ham and Black Forest Cherry cake.

Chateau de Chillon
This castle is located in southwest Switzerland on an island in the eastern end of Lac Leman (Lake Geneva), and it dates from the early 11th century. It was made famous by Lord Byron in his poem “The Prisoner of Chillon”; Byron even carved his name on a pillar in the dungeon. It was home to the Counts of Savoy, including Peter II, who was uncle to one of Henry VIII 's wives, Eleanor of Provence. Today 's castle began as about 100 smaller buildings that were gradually connected to form what we see now.

Matterhorn Museum
Visit the Matterhorn Museum which highlights the historical Zermatt region and provides an in depth look at the legendary mountain. Learn more about the triumph and tragedy of the first ascent of this imposing peak as you immerse yourself in the mesmerizing stories and artifacts.

Grimsel Pass
Travel through the breathtaking scenery of the Grimsel Pass, crossing over the Bernese Alps surrounded by nature. Views of glaciers, crystal clear rivers, and snowcapped mountains will catch your eye as you make your way through the region.

Lucerne
This city of 80,000 people is in north-central Switzerland in the canton of Lucerne and sits on the shores of Lake Lucerne. The town began with a Benedictine monastery in the 8th century and gained importance from its location on trade routes. The most famous sights in Lucerne are the wooden Kapellbrucke (Chapel Bridge) across the Reuss River, the Hofkirche (Church of St. Leodegar) and the Swiss Museum of Transport. The city celebrates Carnival every year beginning the Thursday before Ash Wednesday. Mt Pilatus, with the world 's steepest cog railway, is visible from Lucerne. 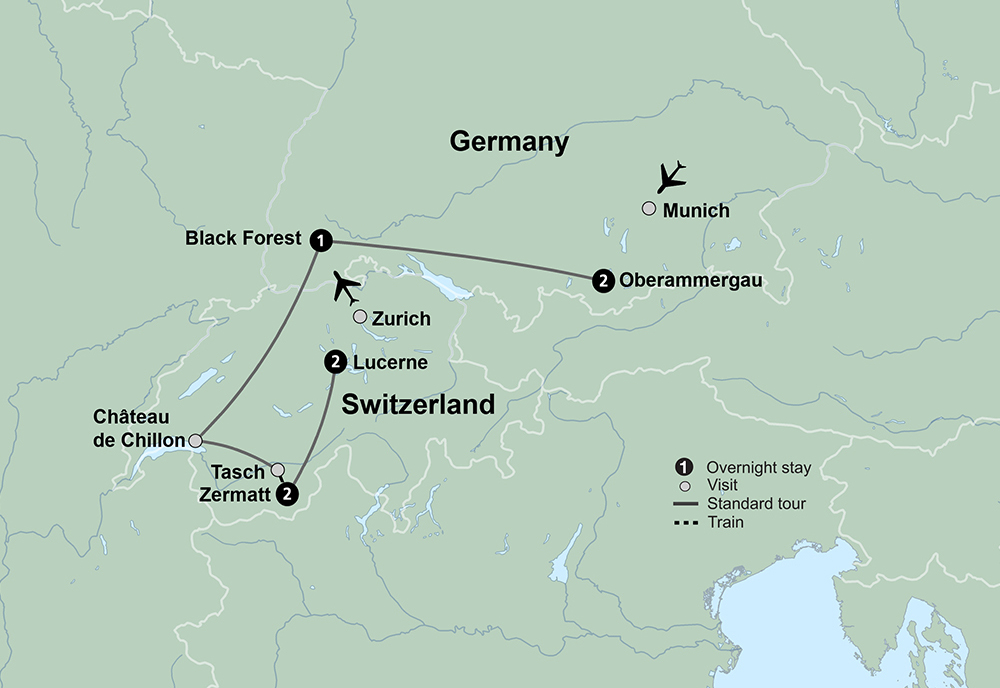