Escorted Tour 11 Days From $4999.00
Cruise past breathtaking scenery pausing along the way in quaint villages and lively cities on a timeless trip down the Danube River. Your lovely state-of-the-art craft offers a special treat - unlimited wine at every dinner. Discover regal Budapest, the “Queen of the Danube,” as well as Slovakia 's remarkable capital, Bratislava. Explore Vienna 's historic sites as you are immersed in the city 's atmosphere of opulence and elegance. Drift along the river through the Wachau Valley dotted with castles and small riverside towns. Behold Munich 's many charms including its world-famous Glockenspiel. In the charming Bavarian village of Oberammergau, you 'll witness a spectacular performance of the Oberammergau Passion Play, whose origins date back to 1634. Watch as the entire village comes together to present you with their rendition of this Biblical story.

Day 1: Overnight Flight
Set out to explore the Danube River and experience the epic Oberammergau Passion Play.
(Meals: None)

Day 2: Budapest, Hungary - Board Cruise Ship - Tour Begins
Unpack for a relaxing 6-night Danube River cruise. Your vessel offers the newest technology, a panoramic deck, terrace café, panorama salon and bar, excellent cuisine, outstanding service and unlimited wine and beer with every dinner onboard. After a welcome aboard cocktail reception and dinner, take in the essence of the region during an evening cruise to view Budapest 's stunning night skyline. Cap the night off with a fun-filled folklore show.
(Meals: Dinner)

Day 6: Emmersdorf - Wachau Valley
View the picturesque landscape as you cruise to the charming town of Emmersdorf. Relax and enjoy the scenery. This afternoon you continue cruising through the romantic Wachau Valley, dotted with magnificent castles and small riverside towns.
(Meals: Breakfast, Lunch, Dinner)

Day 7: Linz - Passau, Germany
This morning, enjoy a walking tour of the riverside town of Linz. Next, continue on to Passau which rests at the confluence of the Danube, Inn and Ilz rivers. Enjoy a leisurely paced walking tour of this 2,000-year-old fairy-tale city, exploring the ornate Baroque architecture, the quaint cobblestone streets, and St. Stephan 's Cathedral, home to Europe 's largest church organ. Tonight you are invited to attend the Captain's Gala Dinner with your fellow passengers.
(Meals: Breakfast, Lunch, Dinner)

Day 8: Passau - Disembark Ship - Munich - Oberammergau
Today, disembark your cruise ship and journey to Munich. Feel the energy of this lively and fascinating city during a tour that highlights Olympic Park, the world-famous Glockenspiel,* and Marienplatz, a beautiful square surrounded by shops, restaurants and cafés. Next, depart for the quaint village of Oberammergau, nestled in the Bavarian Alps.
(Meals: Breakfast, Dinner)

Day 9: Oberammergau - Passion Play
This afternoon, witness a performance of the epic Passion Play. The original performance dates back to 1634. During the Thirty Year War, Oberammergau was spared the Black Plague and for this reason, the citizens vowed that every ten years they would give a play to honor the last days of the life of Christ. The performers of this once-in-a-decade event are all native to the village. To lend authenticity to the performance, the cast starts to grow their hair and beards more than a year in advance. Also, the intricate costumes are made locally by the villagers. During a break in the performance, join your fellow travelers for dinner before returning for the remainder of your Passion Play performance.
(Meals: Breakfast, Lunch, Dinner)

Day 10: Oberammergau - Linderhof Palace - Füssen - Munich
Travel to nearby Linderhof Palace, one of the most artistic and stylistically complex ensembles of the 19th century. It is the only palace King Ludwig II of Bavaria was able to complete. Behind the Baroque façade is a Rococo world, rich in abundant ornamentation. Next, enjoy free time exploring medieval Füssen, the romantic town in the foothills of the Bavarian Alps. Make a special picture stop at Neuschwanstein Castle, Germany 's most famous castle and the inspiration for the castle in Sleeping Beauty. This evening, gather with your fellow travelers for a farewell dinner celebrating the end of an unforgettable journey.
(Meals: Breakfast, Dinner) 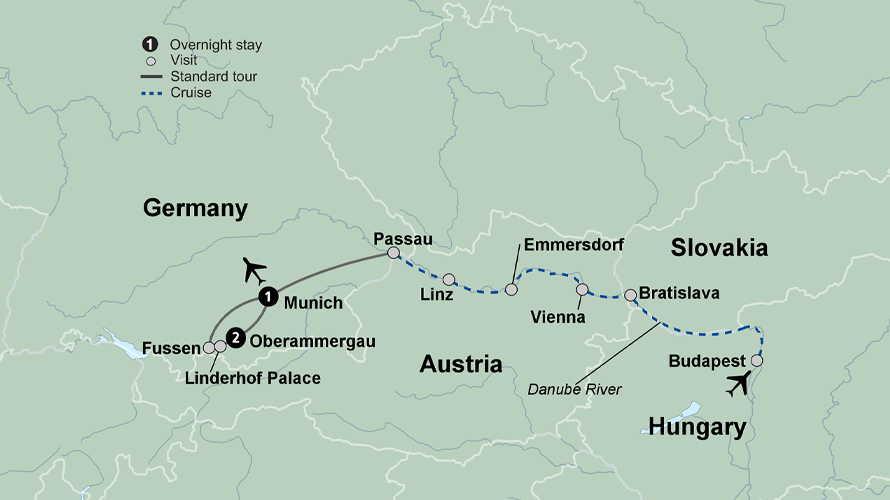