Escorted Tour 10 Days From $4999.00
Cruise past breathtaking scenery pausing along the way in quaint villages and lively cities on a timeless trip down the Danube River. Your lovely state-of-the-art craft offers a special treat - unlimited wine at every dinner. Drift along the river through the Wachau Valley dotted with castles and small riverside towns on a 6-night cruise. Discover Vienna 's historic sites as you are immersed in the city 's atmosphere of opulence and elegance. Behold Munich 's many charms including its world-famous Glockenspiel. Discover regal Budapest, the “Queen of the Danube,” as well as Slovakia 's remarkable capital, Bratislava. In the charming Bavarian village of Oberammergau, you 'll witness a spectacular performance of the Oberammergau Passion Play, whose origins date back to 1634. Watch as the entire village comes together to present you with their rendition of this Biblical story.

Day 1: Oberammergau, Germany - Tour Begins
Your tour begins in the quaint village of Oberammergau, nestled in the Bavarian Alps and renowned for wood-carving and the Passion Play. Time permitting, enjoy a brief orientation walk through town before sitting down for a welcome dinner with your fellow travelers.
(Meals: Dinner)

Day 2: Oberammergau - Passion Play
This afternoon, witness a performance of the epic Passion Play. The original performance dates back to 1634. During the Thirty Year War, Oberammergau was spared the Black Plague and for this reason, the citizens vowed that every ten years they would give a play to honor the last days of the life of Christ. The performers of this once-in-a-decade event are all native to the village. To lend authenticity to the performance, the cast starts to grow their hair and beards more than a year in advance. Also, the intricate costumes are made locally by the villagers. During a break in the performance, join your fellow travelers for dinner before returning for the remainder of your Passion Play performance.
(Meals: Breakfast, Lunch, Dinner)

Day 3: Oberammergau - Munich - Passau - Board Cruise Ship
Journey to Munich for a fascinating city tour that highlights Olympic Park, the world-famous Glockenspiel* and Marienplatz, a beautiful square surrounded by shops, restaurants and cafés. Continue to the charming town of Passau, a 2,000-year-old fairy-tale city that rests at the confluence of the Inn, Ilz and Danube rivers. Unpack for a relaxing 6-night Danube River cruise aboard your lovely ship. This vessel offers the newest technology, a panoramic deck, terrace café, panorama salon and bar, excellent cuisine, outstanding service and unlimited wine and beer with every dinner onboard. Meet your crew at a welcome aboard cocktail reception, followed by a delightful dinner.
(Meals: Breakfast, Dinner)

Day 6: Vienna
Join a local expert exploring Vienna's Imperial architecture including the lavish Hofburg Palace, the impressive Vienna Opera House, the majestic Ringstrasse, and the awe-inspiring St. Stephen's Cathedral. The evening is at leisure to explore Vienna's Baroque elegance, visit one of their famous museums, stroll along the Kartner Strasse, or sample some of Vienna's famous pastries.
(Meals: Breakfast, Lunch, Dinner)

Day 8: Budapest
Embark on a tour of Budapest, Hungary 's lovely capital, featuring the historic Buda Castle area, Fisherman's Bastion and the 500-year-old St. Matthias Church. Enjoy splendid views of the twin cities of Buda and Pest, nestled on opposing banks of the river. Take in the essence of the region during an evening cruise to view Budapest 's stunning night skyline and a fun-filled folklore show.
(Meals: Breakfast, Lunch, Dinner) 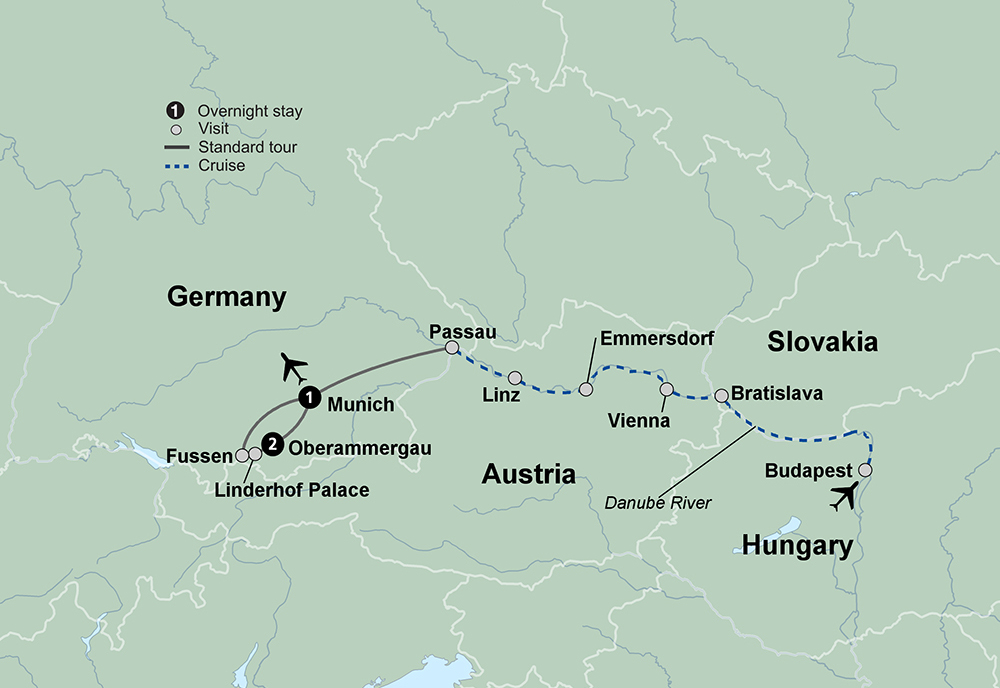