Escorted Tour 13 Days From $4999.00
Discover the German spirit in this land of romance, fairy tales and radiance. Come to know the allure of some of its most iconic cities - Berlin, Hamburg and Munich. Tour the historic landmarks of Berlin with a local guide. Take a Beatles inspired walking tour of Hamburg 's red-light district. Spend two nights in enchanting Marburg located on the Fairy Tale Road. Embark on a guided tour with a Pied Piper in the storybook town of Hamelin. Stay in charming Rothenberg on the Romantic Road and delight in a “Night Watchman” tour. Admire Linderhof Palace before concluding your tour in Oberammergau with a memorable and moving performance of the Passion Play; the origins of this historic event date back to 1634.

Day 1: Overnight Flight
This enchanting journey offers the best of Germany. Travel to some of the country's most iconic cities, view its stunning countryside and experience the epic Oberammergau Passion Play.
(Meals: None)

Day 3: Berlin
Start your day by getting acquainted with Berlin 's main sights with an expert guide. Reflect at the Holocaust Memorial before continuing on to the lively Potsdam Square. Stroll down Niederkirchner Strasse to see remnants of the First Wall and walk through the “Topography of Terror” exhibition, delving into the rise and fall of the Third Reich. See Checkpoint Charlie, the most famous crossing point between East and West Berlin. Explore the beautiful Gendarmenmarkt square, pass through the colorful Old Town, and head down Avenue Unter den Linden to Brandenburg Gate. This afternoon you may choose to join an optional excursion outside the city to visit Potsdam and the famous Cecilienhof Palace.
(Meals: Breakfast)

Day 4: Berlin - Hamburg
Feel like a local when you travel to Hamburg, hopping on the sleek ICE train that connects all the major German cities and reaches speeds of up to 200 miles per hour. Take in “the Venice of the North,” with winding canals and an impressive harbor that made it a center of trade for centuries. Enjoy lunch at a local restaurant before getting the lay of the land on a brief orientation tour. The evening is yours to explore as you wish. Perhaps you will take an optional evening cruise, admiring the cityscape as you coast along.
(Meals: Breakfast, Lunch)

Day 5: Hamburg
Today, it 's your choice! Enjoy a narrated cruise around the massive Hamburg shipping port, including the historic Warehouse District, a UNESCO World Heritage Site -OR- visit the International Maritime Museum which houses nine levels of sea-faring adventure including exhibits on Viking dragon boats, deep-sea diving, and a ship simulator. Later we gather for a walking tour of the Reeperbahn area, Hamburg 's red light district, immortalized as the place where the Beatles cultivated their fame in the early 1960s. Join in the fun with your “singing and ukulele playing local Beatles expert” and travel down memory lane.
(Meals: Breakfast)

Day 6: Hamburg - Hamelin - Marburg
Made famous by the Pied Piper in the stories of the Brothers Grimm, Hamelin is your next stop. Feel like you have stepped into the pages of a storybook when the “Pied Piper of Hamelin” leads you through the city, playing catchy tunes as you discover Hamelin 's charming Tudor-style architecture. Continue on to the medieval university town on Marburg, with its endless alleys and stairways that lead to the castle perched high above.
(Meals: Breakfast, Dinner)

Day 7: Marburg
Enjoy a leisurely morning before joining a local expert on a sightseeing tour inspired by the Brother 's Grimm. Jacob and Wilhelm Grimm studied in Marburg and found its narrow alleys, timbered houses and cobblestone streets a source of inspiration. Visit the Marburg Landgrave Palace, set dramatically atop the city. The remainder of the day is yours to explore one of Germany 's most romantic cities.
(Meals: Breakfast)

Day 8: Marburg - Würzburg - Rothenburg ob der Tauber
Journey to the perfectly preserved medieval town of Rothenburg ob der Tauber, located in the middle of the famous Romantic Road and in the heart of the Franconia wine region. En route, make a stop in Würzburg, a Bavarian wine town known for its lavish Baroque and Rococo architecture. Enjoy time to explore the town on your own before continuing to Rothenburg, located high on a plateau overlooking the Tauber River. Arrive at your city center hotel, the perfect location to discover this captivating town. Take an evening stroll to a local restaurant where you 'll enjoy a tasting of local wines followed by a traditional German dinner. Later, join a colorfully costumed local expert for the famous “Night Watchman” walking tour of this medieval town.
(Meals: Breakfast, Dinner)

Day 9: Rothenburg ob der Tauber
Walk to a nearby bakery and taste a favorite treat of the locals - “schneeball” pastries, also known as “snowballs.” Then, enjoy a private tour through the famous Käthe Wohlfahrt Christmas Museum, enjoy an ornament-making demonstration, and shop for handmade Christmas trinkets. The remainder of the day yours to explore this charming city.
(Meals: Breakfast)

Day 10: Rothenburg ob der Tauber - Linderhof Palace - Oberammergau
Today we make our way through mountains and along winding country roads of Bavaria. Tour Linderhof Palace, the only palace - out of three - that King Ludwig II lived to see completed. Walk the extraordinary halls that were modeled after Versailles with an expert guide and bask in the luxury of past royals. Later, fairytales become reality during a picture stop of Bavaria 's most famous castle, King Ludwig 's third palace, Neuschwanstein. Regarded as the most photographed castle in Germany it was the inspiration for the castle in Sleeping Beauty. Next, continue to the quaint, picturesque village of Oberammergau.
(Meals: Breakfast, Dinner)

Day 11: Oberammergau - Passion Play
This afternoon, witness a performance of the epic Passion Play. The original performance dates back to 1634. During the Thirty Year War, Oberammergau was spared the Black Plague and for this reason, the citizens vowed that every ten years they would give a play to honor the last days of the life of Christ. The performers of this once-in-a-decade event are all native to the village. To lend authenticity to the performance, the cast start to grow their hair and beards more than a year in advance. Also, the intricate costumes are made locally by the villagers. During a break in the performance, join your fellow travelers for dinner before returning for the remainder of your Passion Play performance.
(Meals: Breakfast, Lunch, Dinner)

Day 12: Oberammergau - Munich
Today we travel to Munich, the exciting capital of Bavaria. Feel the energy of this lively city during a tour that highlights Olympic Park, the world-famous Glockenspiel;* and Marienplatz, a beautiful square surrounded by shops, restaurants and cafés. Enjoy time to explore Munich before gathering with your fellow travelers for a farewell dinner celebrating the end of your memorable trip.
(Meals: Breakfast, Dinner)

Berlin
Berlin is the capital and the largest city in Germany. Berlin is located in northeastern Germany on the banks of the River Spree. Berlin dates back to the 13th century. Throughout history Berlin has played a major role in several wars including World War II and the Cold War. After the Cold War ended, the Berlin wall, which divided East and West Berlin, fell. Part of the wall is still intact and visible today, and serves as a reminder of an important part of Berlin 's history. Today, modern Berlin is known for its many cultural attractions, architecture and its high quality of living.

Hamburg
Hamburg is Germany 's second largest city and is known as the country 's Gateway to the World. It 's one of Germany 's most well known and affluent cities with a maritime spirit that can be felt in its architecture and savored in its food.

Hamelin
A town in Lower Saxony, Hamelin is the place where the Pied Piper of Hamelin expelled rats from the town by playing his pipe. The picturesque town full of beautifully restored timber-framed and sandstone buildings (some dating back to the Renaissance!) is ideal for bike rides, scenic walks, boat trips and water tours.

"Pied Piper" Tour
Throughout the streets of Hamelin there are thousands of friendly-looking rats painted on the pavement that point the way to main attractions around town. Many of the sites are related to the story of the Pied Piper, but at the center of town sits the Pied Piper house, one of the biggest and most beautiful Renaissance buildings in Hamelin. Visitors may even catch a glimpse of the Pied Piper himself!

Wurzburg
This city of 125,000 is on the Main River, and traces of its history as a Bronze Age, Celtic and Frankish city can be found still. It was the site of one of the world 's largest witch trials in the 17th century with as many as 900 people executed. On one day in March 1945, 90% of the city was destroyed by British bombers and the firestorm which resulted. Now the city is an important administrative center and center of the local white wine industry.

Rothenburg ob der Tauber
Rothenburg is known for its well-preserved medieval center that seems totally untouched by the passage of time. Surrounding the town is a substantial 14th century town wall that speaks of Rothenburg 's past as a successful free imperial city. It is one of Germany 's best shopping towns and visitors can expect to find lovely prints, wine glasses, Christmas ornaments and beer steins.

Wine Tasting
Germany has thirteen official wine regions with some of the most beautiful landscapes in the country. Of course, along with great wine comes great food, stately castles and manors too—all the things you 'd expect from a country that 's been making excellent wine for a very long time.

"Night Watchman" Tour
At night in the picturesque village of Rothenburg ob der Tauber the night watchman makes his rounds, bringing tourists on an hour of medieval fun. He makes jokes as he stokes his lamp and walks around the village recounting gritty tales about real life to the delight of his companions. 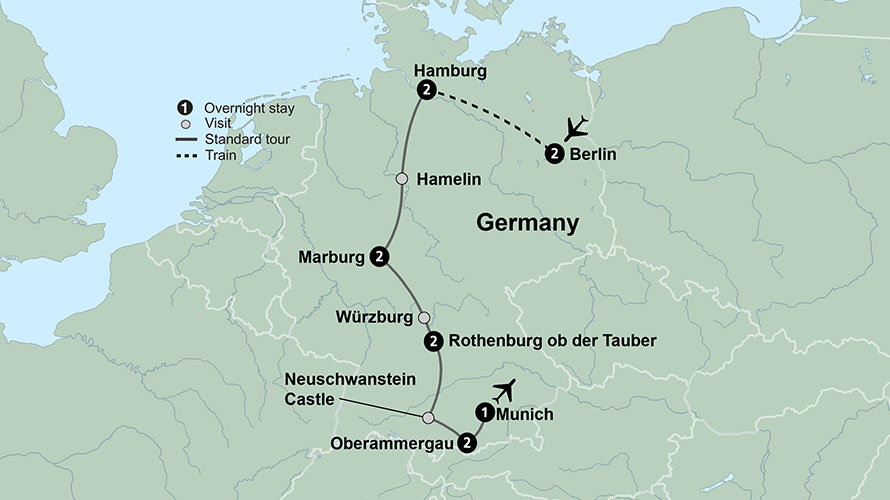