Escorted Tour 12 Days From $4999.00
Behold spectacular Alpine vistas and enjoy a performance of the famed Oberammergau Passion Play on this journey through Italy, Switzerland, Austria, and Germany. In Zermatt, climb aboard the Glacier Express for an unforgettable train ride through the Alpine scenery of majestic mountains, verdant valleys, picturesque canyons, glistening glaciers and snowcapped peaks. The birthplace of Mozart and Mirabell Gardens are featured during your leisurely tour of Salzburg, Austria, before treating your taste buds to a scrumptious dinner and Mozart concert at the centuries-old St. Peter 's Restaurant. In Germany 's Bavarian capital of Munich, see the Marienplatz, the Glockenspiel and the Olympic Park. Witness the beauty of Linderhof Palace and its perfect decorated gardens. Your final destination Oberammergau, a quaint village nestled in the Bavarian Alps, is where you 'll witness a performance of the world-renowned Passion Play, whose origins date back to 1634. Watch as the entire village comes together to fulfill their vow to perform a play every ten years in honor of Christ 's life if they were spared from the Black Plague.

Day 1: Overnight Flight
Breathtaking Alpine vistas await as you travel through Italy, Switzerland, Austria and Germany. From amazing railways to the thrilling Passion Play, experience the wonders only found in the heart of Europe.
(Meals: None)

Day 2: Stresa, Italy (Lago Maggiore*) - Tour Begins
Arrive in Stresa (Lago Maggiore) and take some free time to explore this beautiful lakeside town on your own. Your evening begins with a cocktail party in a wine shop before we cruise to our welcome dinner on Isola dei Pescatori, the most beautiful of the Borromean Islands.
(Meals: Dinner)

Day 3: Stresa
Today we make our way to an ancient village nestled in the mountains. Stop at a family farm to learn about the artisan cheeses they produce. Sample delicious creations and discover how to pair them with local wines. Return to Stresa for an afternoon at leisure.
(Meals: Breakfast)

Day 4: Stresa - Zermatt, Switzerland
Depart Lago Maggiore for a scenic drive into the heart of the mountains. The incredible views of the Italian and Swiss Alps are sure to leave a lasting impression. Upon arrival in Tasch, board a local train for a ride to the spectacular pedestrian village of Zermatt in the Swiss Alps.
(Meals: Breakfast, Dinner)

Day 5: Zermatt
Today, Zermatt is at your fingertips. It 's your choice! Tour Zermatt 's best-known landmarks by foot -OR- enjoy a visit to the Matterhorn Museum where you 'll learn more about the triumph and tragedy behind the first ascent of this imposing peak. The remainder of your day is at leisure.
(Meals: Breakfast)

Day 6: Zermatt - Glacier Express Train - St. Moritz
Traverse bridges and tunnels while aboard the world-renowned narrow gauge Glacier Express, the most charming express train in the world. Enjoy the natural beauty of this route through the heart of the Swiss Alps. Filled with forests, fragrant meadows, streams and deep valleys, it 's a mountain dream come to life. Relax and enjoy a three-course lunch while onboard. Arrive in St. Moritz, playground of the rich and famous.
(Meals: Breakfast, Lunch)

Day 8: Innsbruck - Salzburg - Innsbruck
Travel the Austrian countryside to historic Salzburg, one of Europe's most beautiful and romantic spots. Enjoy a leisurely walking tour of Salzburg 's historic Old Town - the Altstadt. See highlights such as the Cathedral, Mozart's birthplace and Mirabell Gardens. Film buffs will be able to pick out locations from The Sound of Music. This evening, enjoy a delightful Mozart dinner concert at the centuries-old St. Peter 's Restaurant, central Europe 's oldest restaurant.
(Meals: Breakfast, Dinner)

Day 9: Innsbruck - Linderhof Palace - Oberammergau
Today we head to the frontier of Germany, crossing the border into Bavaria. Tour Linderhof Palace, the only palace - out of three - that King Ludwig II lived to see completed. Walk the extraordinary halls that were modeled after Versailles with an expert guide and bask in the luxury of past royals. Later, fairytales become reality during a picture stop of Bavaria 's most famous castle, King Ludwig 's third palace, Neuschwanstein. Regarded as the most photographed castle in Germany it was the inspiration for the castle in Sleeping Beauty. Continue on to the quaint village of Oberammergau, nestled in the Bavarian Alps, and your home for the next two nights.
(Meals: Breakfast, Dinner)

Day 10: Oberammergau - Passion Play
This afternoon, witness a performance of the epic Passion Play. The original performance dates back to 1634. During the Thirty Years' War, Oberammergau was spared the Black Plague and for this reason, the citizens vowed that every ten years they would give a play to honor the last days of the life of Christ. The performers of this once-in-a-decade event are all native to the village. To lend authenticity to the performance, the cast start to grow their hair and beards more than a year in advance. Also, the intricate costumes are made locally by the villagers. During a break in the performance, join your fellow travelers for dinner before returning for the remainder of your Passion Play performance.
(Meals: Breakfast, Lunch, Dinner)

Day 11: Oberammergau - Munich
Enjoy a leisurely morning before departing for the Bavarian capital of Munich. Join a local expert for a tour featuring the Marienplatz, the Glockenspiel and Olympic Park. This evening, gather with your fellow travelers for a farewell dinner at a local restaurant celebrating the end of an unforgettable journey.
(Meals: Breakfast, Dinner)

Lago Maggiore
Lago Maggiore is Italy's second largest lake and it's located on the south side of the Alps in both Italy and Switzerland. The climate, in the winter and summer, is mild enough to produce Mediterranean vegetation, with many gardens growing rare and exotic plants. Many islands sit within the lake, including the Borromean Islands, the Brissago Islands, Castelli di Cannero, and Isolina Partegora.

Island Dinner
Set sail for a panoramic cruise of magical Lago Maggiore with the majestic Alps as its incredible backdrop. Cruise to Isola dei Pescatori, one of the beautiful Borromean islands, and enjoy a delicious dinner.

Glacier Express Train
This famous bright red train runs the length of southern Switzerland between Zermatt in the west and St. Moritz in the east, and is known as the “slowest express train in the world.” The trip takes about 7 ½ hours and it traverses its highest point at the Oberalp Pass at 6,700 feet (2042 meters). Some sections are steep enough to require a rack-and-pinion system on the tracks. The cars have panoramic windows and domes, and there is a restaurant car. The towns it links are among the most famous ski resorts in the world, and it gets its name from the Rhone Glacier in western Switzerland, one of the sources of Lake Geneva and the Rhone River.

St. Moritz
St. Moritz is a ski resort town in southeast Switzerland known as a “jet set” destination and playground of the wealthy. It is in the canton of Graubunden, not far from the Italian border, also not far from the highest peak in eastern Switzerland, Pic Bernina (13,200 feet/4023 meters). St. Moritz is named for St. Maurice, a Roman martyred there in the 3rd century, and first became popular as a pilgrimage site with healing spring waters. The 1928 and 1948 Winter Olympics were held here. The town was used in the opening scenes of Alfred Hitchcock 's original version of “The Man Who Knew Too Much” with Peter Lorre in 1934.

Innsbruck
This is the capital of the state of Tyrol in the Alps of western Austria. Innsbruck is famous as a winter sports center and was the site of the 1964 and 1976 Winter Olympics. It is beautifully situated in the valley of the Inn River, and its most famous sights are the Golden Roof (a structure made from 2,800 gilded copper tiles that was added in 1500 to a building to celebrate the marriage of Emperor Maximilian I), the beautifully preserved city center with buildings covered in traditional Christmas decorations in the season, and the surrounding mountains.

Salzburg
The name of this city means “Salt Fortress” and it comes from the custom of taxing salt shipments down the Salzach River. It is the 4th largest city in Austria, and the capital of the state of Salzburg. The baroque Old Town is a UNESCO World Heritage site, and the city sits in a valley surrounded by the Alps. Mozart was born here in the 18th century, and the city was the setting for “The Sound of Music”. Salzburg became part of Austria in the early 19th century, given by Bavaria. Some of the important sights are the Salzburg Castle, Salzburg Cathedral, Mirabell Gardens, the birthplace of Mozart and sites associated with “The Sound of Music”.

St. Peter 's Restaurant
Guests will enjoy a lovely full course meal including wine and beer, while comfortably seated in an 1,200-year-old St. Peter 's restaurant. Stiftskeller St. Peter is a restaurant within the monastery walls of St. Peter's Arch abbey in Salzburg, Austria. At the heart of Europe 's oldest restaurant, which dates back to 803, is Austrian culture, history and modernity. St. Peter Stiftskeller first built as inn, prospered into homes of the nobility including Austrian composer, Michael Haydn. It soon became the quarters for French troops during the Napoleonic wars in 1809. The culinary arts have flourished for centuries at St. Peter Stiftskeller and continue to evolve. Seasonal changes and sophisticated ingredients contribute to an ever-changing dining experience.

Mozart Dinner Concert at St. Peter's Stiftskeller
This magical evening takes place in the elegant Baroque hall of the centuries old St. Peter 's Restaurant. The hall is part of the famous Benedictine Monastery of St. Peter and is one of the few remaining concert venues that is still permitted to use real candle light to enhance the experience. Enjoy a special three course dinner prepared from authentic 18th century recipes. 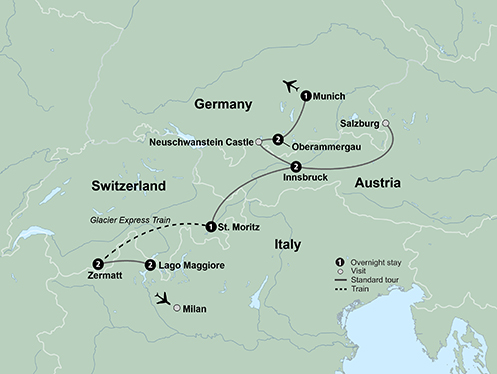