Escorted Tour 13 Days From $5149.00
Experience the grand cities of Europe 's Alpine region and be part of history in the making when you enjoy a performance of the legendary Passion Play in the Bavarian village of Oberammergau. Marvel at the architectural beauty and rich history of Vienna on a city tour. Embark on a cruise along the Danube River through the historic Wachau Valley, visit the Benedictine Abbey in Melk, and enjoy a Mozart dinner concert at the centuries-old St. Peter 's Restaurant in Salzburg. You 'll view the picturesque pinnacles and turrets of Neuschwanstein Castle, and then overnight in Bavaria 's mysterious Black Forest, where popular souvenirs include authentic cuckoo clocks and wood carvings. In Switzerland, highlights include a visit to the Chateau de Chillon on lovely Lake Geneva and a walking tour in Lucerne. A farewell dinner with your fellow travelers is the perfect end to this memorable tour.

Day 3: Vienna
Begin your day with a locally guided tour of Vienna showcasing its architectural marvels. Visit the incredible Schönbrunn Palace and see the impressive St. Stephen's Cathedral. This afternoon, enjoy leisure time to independently explore the avenues of Vienna or visit one of its many museums.
(Meals: Breakfast)

Day 4: Vienna - Salzburg
After a short journey through the countryside, enjoy a lovely cruise* along the Danube, one of Europe 's most important waterways. Later, make a stop at the Benedictine Melk Abbey before continuing to the musical city of Salzburg. Tonight, sit down for a Mozart dinner concert at the centuries-old St. Peter 's Restaurant.
(Meals: Breakfast, Dinner)

Day 5: Salzburg
Discover the splendor of Salzburg on a leisurely paced walking tour of the Old Town. Some of the amazing sights you will see along the way include the Cathedral, Mozart 's birthplace and Mirabell Gardens.
(Meals: Breakfast)

Day 6: Salzburg - Munich, Germany - Oberammergau
Today we travel to Germany. In Munich, feel the energy of this lively city during a tour that highlights Olympic Park, the world-famous Glockenspiel, and Marienplatz, a beautiful square surrounded by shops, restaurants and cafés. Later we arrive at our home for the next two nights — the quaint village of Oberammergau, renowned for woodcarvings and the Passion Play.
(Meals: Breakfast, Dinner)

Day 7: Oberammergau - Passion Play
This afternoon, witness a performance of the epic Passion Play. The original performance dates back to 1634. During the Thirty Years' War, Oberammergau was spared the Black Plague and for this reason, the citizens vowed that every ten years they would give a play to honor the last days of the life of Christ. The performers of this once-in-a-decade event are all native to the village. To lend authenticity to the performance, the cast starts to grow their hair and beards more than a year in advance. Also, the intricate costumes are made locally by the villagers. During a break in the performance, join your fellow travelers for dinner before returning for the remainder of your Passion Play performance.
(Meals: Breakfast, Lunch, Dinner)

Day 8: Oberammergau - Black Forest
Today fairy tales become reality at a picture stop of Bavaria 's most famous castle, King Ludwig 's Neuschwanstein. After, get a taste of local flavors at a German winery. Enjoy a tour before sampling the vintages and looking out over the rows of vines and nearby Lake Constance. Next you are off to the heart of the stunning Black Forest, a region famous for its artisans who create authentic cuckoo clocks, Hummels and wood carvings.
(Meals: Breakfast, Dinner)

Day 9: Black Forest - Zermatt, Switzerland
Welcome to Switzerland! Your first stop en route to Zermatt is at one of the most photographed castles in the world, the Château de Chillon, located on serene Lake Geneva. Later, enjoy a short train ride aboard the Matterhorn Gottard Bahn from Tasch to the relaxing pedestrian village of Zermatt in the Swiss Alps. Take a stroll and breathe in the fresh Alpine air.
(Meals: Breakfast, Dinner)

Day 10: Zermatt
Today Zermatt is at your fingertips. It 's your choice! Explore on foot during a guided walking tour -OR- experience Zermatt independently before visiting the Matterhorn Museum to learn more about the triumph and tragedy of the first ascent of this imposing peak. The remainder of your day is at leisure.
(Meals: Breakfast)

Day 11: Zermatt - Grimsel Pass - Lucerne
Views of glaciers, crystal clear rivers and snowcapped mountains will invigorate you as you travel through the spectacular scenery of the Grimsel Pass. Your destination is Lucerne, the “Swiss Paradise on the Lake.”
(Meals: Breakfast)

Day 12: Lucerne
This morning, embark on a scenic walking tour of this picturesque city, including a stroll through its romantic Old Town. The remainder of the day is yours to independently explore all Lucerne has to offer. Tonight, come together with your fellow travelers for a farewell dinner featuring local specialties and toast the end of a memorable trip.
(Meals: Breakfast, Dinner)

Danube Cruise
The cruise travels through the Wachau Valley, a UNESCO site running 25 miles from Melk to Krems in Lower Austria. The valley has been inhabited since prehistoric times and is a famous wine region. There are no bridges across the Danube in the valley, so ferries are the only way to cross, and the area has kept its character thanks to that. The town of Durnstein in the valley is where Duke Leopold held King Richard Lionheart of England captive.

Salzburg
The name of this city means “Salt Fortress” and it comes from the custom of taxing salt shipments down the Salzach River. It is the 4th largest city in Austria, and the capital of the state of Salzburg. The baroque Old Town is a UNESCO World Heritage site, and the city sits in a valley surrounded by the Alps. Mozart was born here in the 18th century, and the city was the setting for “The Sound of Music”. Salzburg became part of Austria in the early 19th century, given by Bavaria. Some of the important sights are the Salzburg Castle, Salzburg Cathedral, Mirabell Gardens, the birthplace of Mozart and sites associated with “The Sound of Music”.

Mozart Dinner Concert at St. Peter's Stiftskeller
This magical evening takes place in the elegant Baroque hall of the centuries old St. Peter 's Restaurant. The hall is part of the famous Benedictine Monastery of St. Peter and is one of the few remaining concert venues that is still permitted to use real candle light to enhance the experience. Enjoy a special three course dinner prepared from authentic 18th century recipes.

Black Forest
This is a heavily forested mountain range in southwest Germany that lies east of the Rhine River and borders France on its west and Switzerland in the south. The highest peak in the 150 km-long (93 miles) region is about 1500 meters/4,900 feet, and there are several beautiful glacial lakes within the forest, such as Titisee and Feldsee. The famous spa town of Baden-Baden is in the northern part of the forest, and there are numerous hiking trails and driving circuits to visit the traditional villages. The Black Forest is known for wood-carving, especially in the manufacture of cuckoo clocks, and for foods like Black Forest ham and Black Forest Cherry cake.

Chateau de Chillon
This castle is located in southwest Switzerland on an island in the eastern end of Lac Leman (Lake Geneva), and it dates from the early 11th century. It was made famous by Lord Byron in his poem “The Prisoner of Chillon”; Byron even carved his name on a pillar in the dungeon. It was home to the Counts of Savoy, including Peter II, who was uncle to one of Henry VIII 's wives, Eleanor of Provence. Today 's castle began as about 100 smaller buildings that were gradually connected to form what we see now.

Lucerne
This city of 80,000 people is in north-central Switzerland in the canton of Lucerne and sits on the shores of Lake Lucerne. The town began with a Benedictine monastery in the 8th century and gained importance from its location on trade routes. The most famous sights in Lucerne are the wooden Kapellbrucke (Chapel Bridge) across the Reuss River, the Hofkirche (Church of St. Leodegar) and the Swiss Museum of Transport. The city celebrates Carnival every year beginning the Thursday before Ash Wednesday. Mt Pilatus, with the world 's steepest cog railway, is visible from Lucerne. 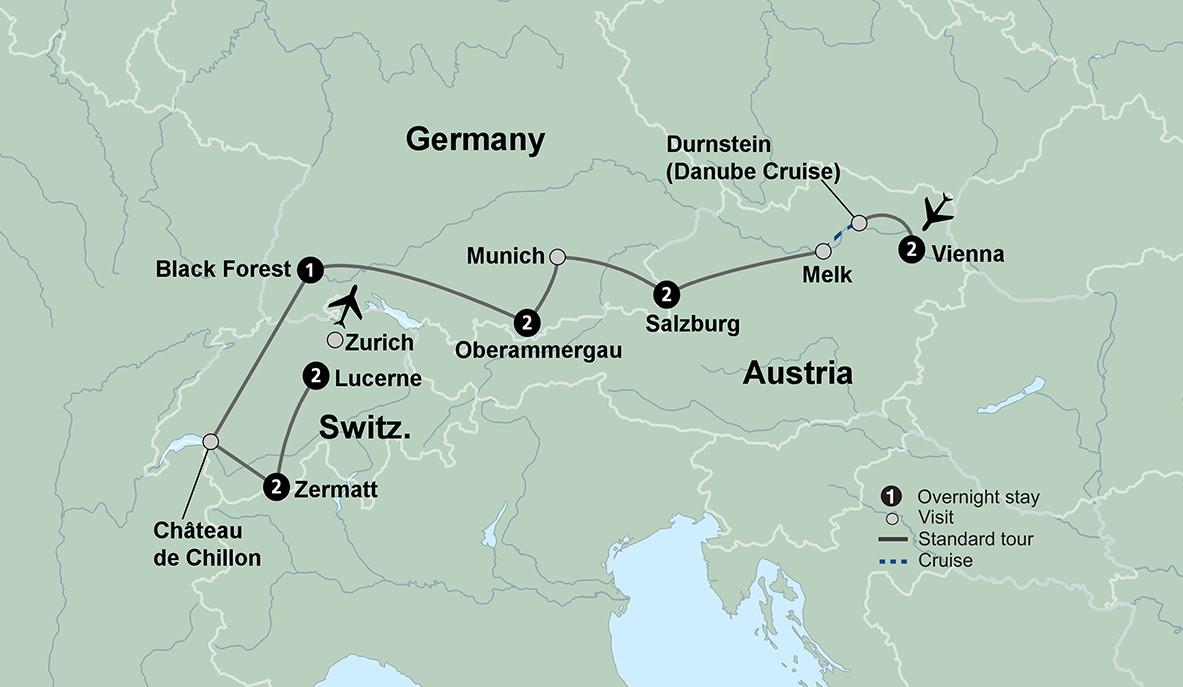