Escorted Tour 11 Days From $4199.00
Great sightseeing, traditional entertainment and fabulous cultural elements define an amazing tour of the Imperial cities of Central Europe. A city tour of Budapest features the Matthias Church, where many kings have had their coronations. Travel back in time with a visit to a 14th-century castle, where knights with colorful costumes and authentic weaponry recreate the days of chivalry. In the grand city of Vienna, the baroque marvels of Schönbrunn Palace, the summer retreat of the Habsburg dynasty, are revealed. See Prague 's Hradcany Castle and its famous Golden Lane. Your tour concludes with a memorable and moving performance of the Oberammergau Passion Play; the origins of this historic event date back to 1634.

Day 1: Overnight Flight
Set out on an exciting cultural experience in the Imperial Cities of Central Europe featuring traditional entertainment and the epic Oberammergau Passion Play.
(Meals: None)

Day 2: Budapest, Hungary - Tour Begins
Welcome to Budapest, the "Queen of the Danube," truly one of the world's most beautiful cities. Enjoy time at leisure to relax or explore before gathering for tonight 's welcome dinner.
(Meals: Dinner)

Day 3: Budapest
Join a local expert who brings the city to life. Discover Matthias Church, site of many coronations of kings. Next, see the Fisherman 's Bastion with its white walls, towers and arcades for spectacular views. Continue to historic Old Buda and Gellert Hill, followed by the Parliament. At Heroes Square, admire the imposing Millennium Monument, completed in 1904, which memorializes the 1,000th anniversary of Hungarian dominion.
(Meals: Breakfast)

Day 4: Budapest - Bratislava, Slovakia - Vienna, Austria
This morning we journey to Bratislava, the former Imperial capital of the Hapsburg Empire. During your visit, get to know the city 's history on an expert led tour. A scenic ride through the countryside takes you into the grand city of Vienna, the former capital of the Austro-Hungarian Empire. Tonight, enjoy dinner featuring regional wine and cuisine of Vienna.
(Meals: Breakfast, Dinner)

Day 5: Vienna
This morning, join a local resident for a visit to magnificent Schönbrunn Palace, the summer retreat of the Habsburg dynasty for more than 200 years. Continue to Vienna 's city center. En route, behold the beautiful architecture, scenic parks and gothic spires that fill the city. End your day with an unforgettable classical music concert featuring many fine melodies from the great composers — Mozart and Strauss.
(Meals: Breakfast)

Day 6: Vienna - Cesky Krumlov, Czech Republic - Prague
Depart Vienna, crossing the border into the Czech Republic. Continue to the fairy-tale town of Cesky Krumlov. During some free time you may explore the well-preserved streets lined with Baroque architecture. Arrive in Prague, also known as “The Golden City" and "The City of a Hundred Spires."
(Meals: Breakfast, Dinner)

Day 7: Prague
Your introduction to this fairy-tale city begins with a panoramic tour. Next, explore the majestic Hradcany Castle, including the gothic St. Vitus Cathedral. Then we stroll down the quaint, colorful Golden Lane. Discover the lovely statue-lined Charles Bridge. This afternoon enjoy time to relax or explore independently. Perhaps you 'll shop for famous Bohemian crystal or visit one of the city 's many outstanding museums, such as the Lapidarium, home of stone sculptures dating from the 11th century to the present.
(Meals: Breakfast)

Day 9: Oberammergau - Passion Play
This afternoon, witness a performance of the epic Passion Play. The original performance dates back to 1634. During the Thirty Year War, Oberammergau was spared the Black Plague and for this reason, the citizens vowed that every ten years they would give a play to honor the last days of the life of Christ. The performers of this once-in-a-decade event are all native to the village. To lend authenticity to the performance, the cast starts to grow their hair and beards more than a year in advance. During a break in the performance, join your fellow travelers for dinner before returning for the remainder of your Passion Play performance.
(Meals: Breakfast, Lunch, Dinner)

Day 10: Oberammergau - Munich
Today we travel to Munich, the exciting capital of Bavaria. Feel the energy of this lively city during a tour that highlights Olympic Park; the world-famous Glockenspiel;* and Marienplatz, a beautiful square surrounded by shops, restaurants and cafés. Enjoy leisure time to explore fascinating Munich before gathering with your fellow travelers for a farewell dinner celebrating the end of an unforgettable trip.
(Meals: Breakfast, Dinner)

Matthias Church
The original church was built in the early 11th century in the Buda section of Budapest near the Buda Castle. It was reconstructed in the 14th century in Gothic style and was named for King Matthias of Hungary. When the Ottoman Turks occupied Buda in the 16th century it became the main mosque of the city, and at that time many of the frescos inside were destroyed. Most were restored in the 19th century. It was used as a camp by Soviet and German soldiers during the Soviet occupation of Budapest in late WWII.

Fisherman's Bastion
This is a terrace overlooking the Danube on the Buda side of the river near the Buda Castle and Matthias Church. It was built in the early 20th century and honors the fisherman 's guild which defended the city walls in this part of Buda. The towers represent the 7 Magyar (Hungarian) tribes who settled here and there is a statue of King Stephen I of Hungary between the Bastion and Matthias Church.

Schönbrunn Palace
This Vienna palace was a summer residence of the Holy Roman Emperors beginning in the 17th century, and is the most-visited site in Austria. Emperor Maximillian II bought the property for a hunting preserve, and it was remodeled by Empress Maria Theresa in the mid 18th century. On the grounds are an orangerie, a palm house, a French garden designed by a student of the designer of the gardens at Versailles in France, an English garden and a large park. Concerts are often held here with music of Mozart and others.

Cesky Krumlov
This is a small city on the Vltava River south of Prague and a UNESCO World Heritage site. It was once an important trade route through Bohemia, and is home to the Cesky Krumlov Castle, the second-largest in Czech Republic. The town was founded in the 13th century, and most of the old city buildings date from the 14th century. Cesky Krumlov is home to several important arts festivals every year, including candlelight operas in the 16th-century theater in the castle.

Prague
Prague is the capital of the Czech Republic and of the state of Bohemia, with a population of about 2 million in the metro area. Because it received very little damage in WWII, it is has many beautifully preserved sights from several eras and its historic center is a UNESCO World Heritage site. It was capital of the Holy Roman Empire and a center of the Austro-Hungarian Empire, and it was the site of the Velvet Revolution in 1989 when citizens peacefully took Czechoslovakia back from the Communists. It is known for music (composers Dvorak, Smetana and Mozart lived here), literature (Franz Kafka) and for having almost as many kinds of Pilsner beer as it has bars and restaurants.

Hradcany Castle
Prague Castle, in the Hradcany district, is the largest ancient castle in the world. It began as the Church of the Virgin Mary in 870 A.D., and soon was surrounded by a convent, a basilica, St. Vitus Cathedral and a 12th-century palace, finally with defensive walls and turrets and enlarged royal quarters and government offices. It has been used continuously as a seat of government longer than any other place in the world. One interesting section of the castle is Golden Lane, made up of tiny attached houses which housed alchemists in the 16th century, whose task was to try to find ways to turn ordinary materials to gold. 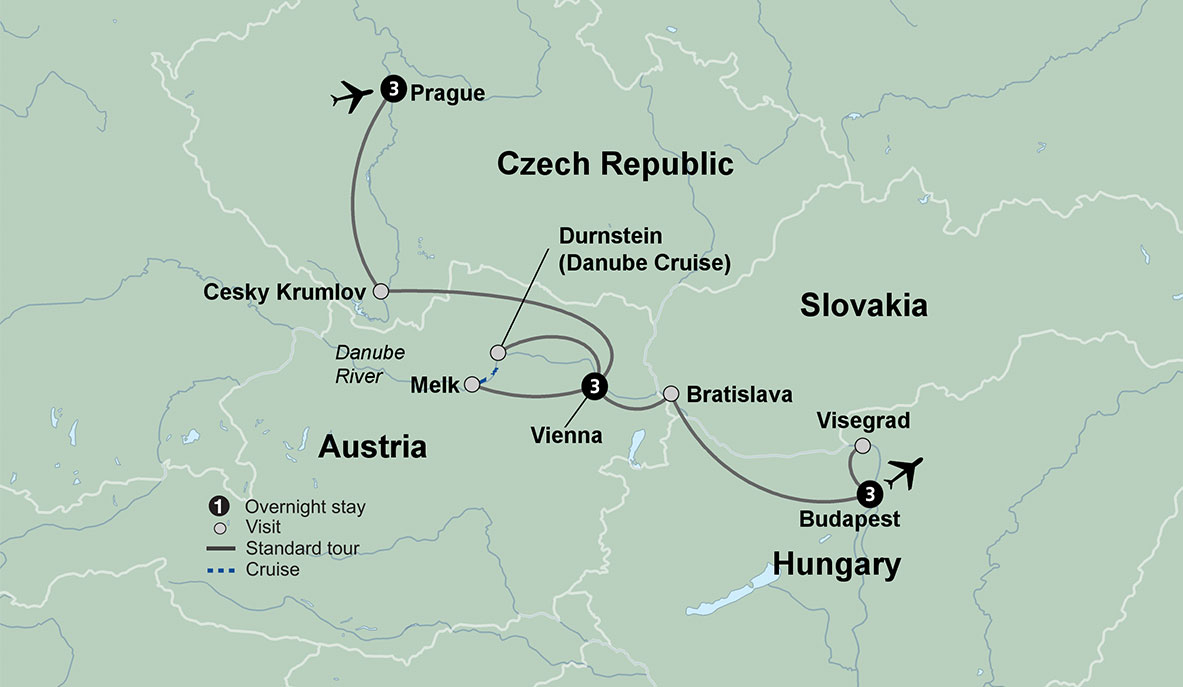